HOW IT ALL BEGAN

Casal Garcia was born in 1939, a year in which the vintage was particularly good. Returning by train from the grape harvest in the Douro, the French oenologist Eugène Hélisse decided to interrupt his journey to Oporto after passing the vines of the Quinta da Aveleda, in Penafiel. Dressed in white, and with a straw hat to ward off the heat of the end of summer, he began to walk towards the property’s cellar. He went in, introduced himself and insisted on speaking to the owner, Roberto Guedes.

What he had seen minutes before from the window of the train was truly special: the vines were beautifully cared for and the land was divided according to grape variety, everything in French style. This was not a usual procedure in the Vinho Verde region. After a long conversation, Roberto Guedes decided to contract the services of the French oenologist, who had promised him significant improvements in the method of winemaking. The results became evident at the end of the harvest, when Eugène Hélisse took a sample from a wooden barrel and placed it in an old glass bottle. The wine had a beautiful, transparent colour and such a freshness that everyone present was thrilled. Thus, in order to enhance the wine’s appearance, he passed a lace handkerchief over the bottle to clean the dust. And there the lace remained!

The name came about by itself, since the wine was produced from one of the vines of Aveleda: that of Casal Garcia. 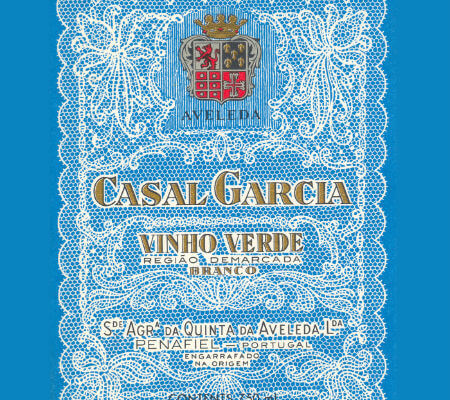 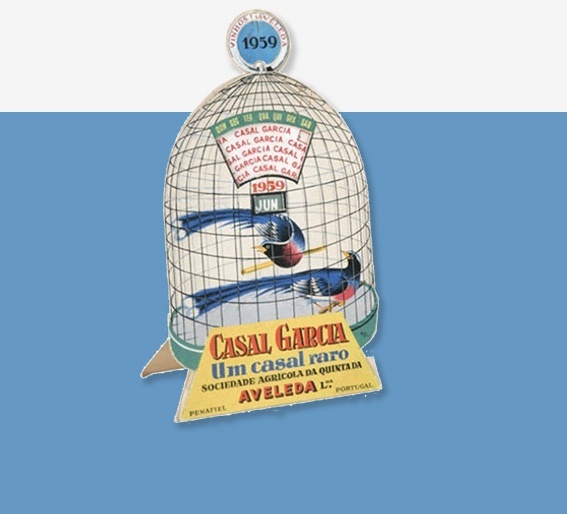 THE BEGINNING OF HAPPINESS

Since wine is for celebrating and sharing, Casal Garcia came to be represented by an image of two birds. A true couple, of a rare joy. There then appeared advertisements and elegant calendars showing the two birds of paradise in scenes of beauty, with the springs and lovely scenery characteristic of the Minho region.

This way of communicating the freshness and lightness of Casal Garcia wine would earn it many awards. 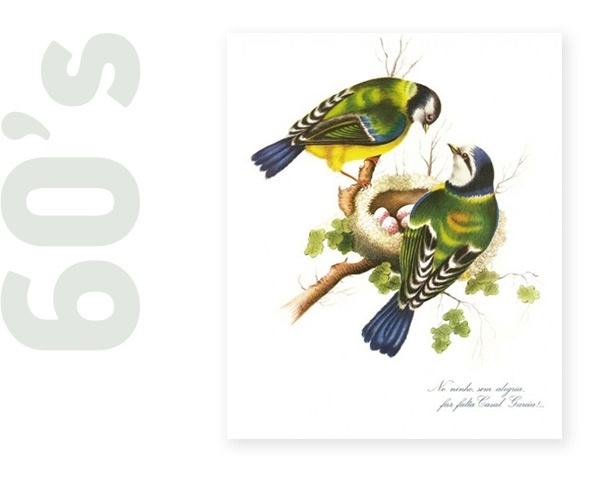 Large markets such as the United Kingdom, Italy, Brazil and many others recognized the unique character of this vinho verde. It was already at this time one of the most exported Portuguese brands, and took with it the refreshing, balanced and jovial ideal of a typically Portuguese beverage. 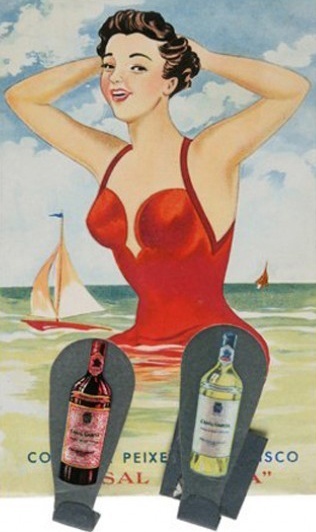 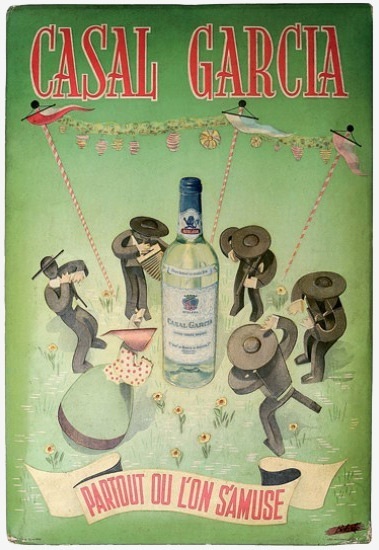 The years of change in Portugal led to a new Casal Garcia consumer profile.

With its growing presence in export markets and in Portugal, and brand was embraced by consumers as a wine with a difference, characterized by a low calorie and alcohol content.

Female consumers liked it and recommended it to the male sector!

A TOAST TO PORTUGAL

It was in 1980 that Portugal began to become one of the favourite holiday destinations for the northern European countries. The hospitality of its people, the climate and the culinary delights often led those who came on holiday to Portugal to raise a happy toast in the Portuguese fashion.

This decade was marked by a strong growth in sales in the United Kingdom, which had recently discovered the appeal of Vinho Verde. 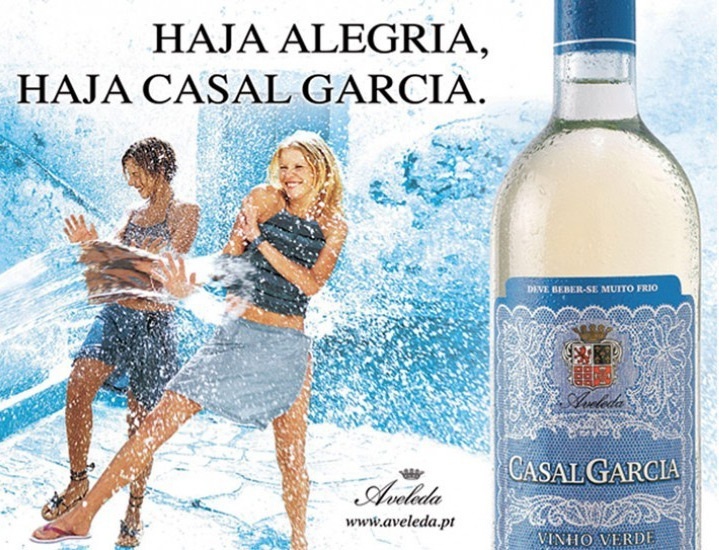 HAPPINESS IS WITH CASAL GARCIA

The ever faster pace of life, the development of commerce and the increasing need for moments of enjoyment led to a new motto:

A phrase that stayed with so many Portuguese, who recognize in Casal Garcia an essential element for celebrating. The jovial and lively legacy was then turned into a song, which practically became the brand’s hymn.

In 2007 the commemorative edition Casal Garcia World Wine was launched, with the objective of celebrating the arrival of Casal Garcia in 60 countries.

It was at the end of the first decade of this millennium that Casal Garcia celebrated its 70th anniversary. Crossing this threshold inspired strength and the desire, on the part of Aveleda, to make it stronger still.

With significant technological investments in the field of vines and winemaking, Casal Garcia now has a “brother”: Casal Garcia Rosé. The fruit of ancient knowledge, and using the red grapes of the Vinho Verde region, Aveleda launched a wine that brings more colour to Happiness. An innovation that perfectly matches the brand’s values, and the palate of so very many fans throughout the world. 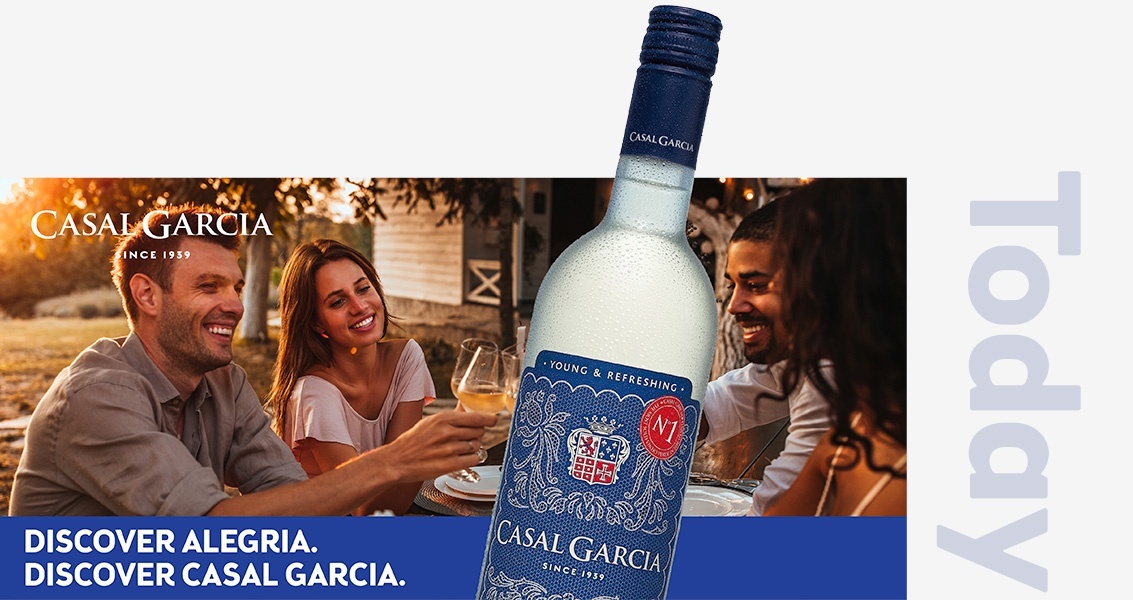 Present in more than 70 countries, Casal Garcia is today the world’s best selling Vinho Verde wine. Casal Garcia is an ambassador of joy and happiness throughout the world living with you some great moments.

The brand has diversified its portfolio according to the market trends, having today a range of wines, sangrias and sparklings!

Find out more or adjust your settings.